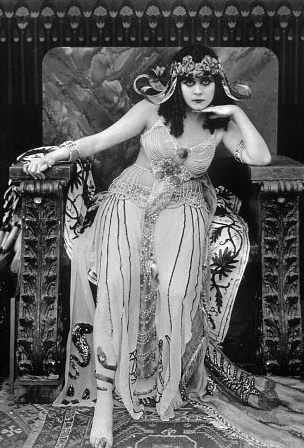 There were over 25 movies produced during the silent era with the word vampire in the title, as a result many writers and researchers assumed, incorrectly that all these films were about vampires. Case in point, Vampire of the Coast (1909) is credited by many sources as being the first vampire movie; however, this was not a vampire movie at all, at least not in the conventional sense of the word. The Olean Evening Times of April 1909 gave a brief description of Vampire of the Coast. -  “Outlaws cause wreck of ship on rock-bound coast. An unusual elopement of pretty girl adds to the entertainment." 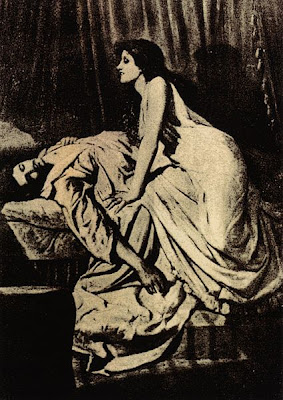 What causes the confusion with this film and many others like it, is the fact that there is little or no information about many these early “vampire films” other than their title and an approximate release dates. Many people assume that because the word vampire is in the title, the film must be about vampires. The word vampire did not always mean a blood sucking undead fiend; it was sometimes used to describe a villain or an unsavory character.


“Vampire” or “vamp” was also a term commonly used in early Hollywood to describe a woman who uses her charms to seduce a man. The term was use in reference to several silent movie actresses and was used pretty much the same way we would use the word “Diva” today.  Theda Bara who was one of Hollywood’s earliest sex symbols was known for being the quintessential vamp.
The use of  “vampire” or “vamp”  to describe a female fatale in the early 20th century is credited to Rudyard Kipling’s  poem “The Vampire”  published  1897 . It is said that Kipling found his inspiration from a painting by Philip Burne-Jones

Some of the most famous mistaken vampire movies besides Vampire of the Coast are:
In the Grip of the Vampire (1913) in this French film the vampire is figurative. A girl’s uncle attempts to erase her mind with drugs in order to get her inheritance.
The Vampire's Trail (1914) a short Drama directed by T. Hayes Hunter and Robert G. Vignola, starring Alice Joyce, Tom Moore, and Alice Hollister.  This film is a drama and has nothing to do with vampires.


Vampires of the Night (1914) a lost Italian film was not a horror film at all.  It is instead a drama about a condemned prisoner who writes to his wife to explain his situation. The wife, fearing that she will no longer be able to take care of her only child, hands the child over to her grandmother. The grandmother then takes the child to the home of a Duke and Duchess and steals their child in exchange.
The Devil's Daughter (1915) was an American drama, not a horror film in the least.  Directed by Frank Powell and starring the most famous vamp of them all, Theda Bara. This film is also considered to be lost. 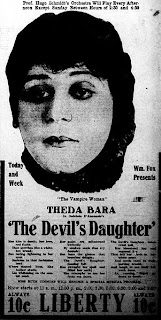 So what was the first vampire movie ever made? A strong contender is a British film The Vampire (1913) in this film a native woman in India kills a hunter and when his friend shoots her, she turns into a snake woman and kills him as well. In Indian culture, vampires are allegedly able to turn into various animals, the snake is one animal form that is assumed quite often, particularly by female vampires. Unfortunately, The Vampire (1913) is a lost film, but it may very well be the very first vampire film.
It’s also worth mentioning that Dracula’s Death(1921) or Drakula halála, written and directed by Károly Lajthay, was not the first Dracula film as some believe. Dracula’s Death (1921) a Hungarian film is not really about Dracula at all. This film depicts a woman’s frightening experiences after visiting an insane asylum where one of the inmates claims to be the famous Count Dracula.  She is then plagued by visions of the count and is unable to determine if the visions are real are simply nightmares. This film is currently believed to be lost. 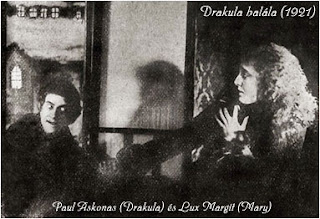 Perhaps the most famous mistaken vampire movie of all is them London After Midnight (1927) directed by Todd Browning and starring Lon Chaney. In this film Chaney plays a Scotland Yard detective who disguises himself to look like a vampire in order to catch a murderer. As with many American films during this era the supernatural was explained away by logical means.  In this case Chaney is merely pretending to be a vampire, hence there is no real vampire in this movie. London After Midnight (1927) is perhaps the most sought after lost film, the last known copy was destroyed in a film vault fire in 1967.